Assessment process of vegetation cover by remote-sensing images should be based on understanding of the vegetation indices. Vegetation indices are widely used for assessing and monitoring ecological variables such as vegetation cover, above-ground biomass and leaf area index. The aim of the present research was to study of the ASTER data capabilities to estimate the vegetation cover percentage on Ghareh Aghaj Watershed as well as selecting proper vegetation indices for vegetation cover procurement. Various preprocessing, including image rectification was applied with geo-referencing of the image to a registered image with RMSE of 0.5 pixel. The atmospheric and topographic corrections were applied using subtraction of dark object's method and the Lambert method accordingly. Image processing, including vegetation indices and supervised classification were employed to produce the vegetation cover map. Field data collection was started on June 2008 on 8962.25 ha and prolonged about two months. Various vegetation types were sampled using the stratified random sampling method. Sixty random sampling points were selected, and the vegetation cover percentage was estimated with estimation of checking method. Digital data and the Indices maps were used as independent data and the field data as dependent variables. The resulted models were processed on, and the resulted images were categorized in five classes. Finally, the produced maps were controlled for their accuracy. The results confirmed that the NDVI vegetation indices were significantly correlated with field cover data (P?0.01), the strongest relationships explaining relatively 78% of the variance in the field measurements (R2=0.38). Other vegetation indices were not significantly related to vegetation cover percentage of the field data. The total validity and the Kappa coefficient for this map are 68.5% and 72.4%. On these sites, the R square was exceeded to 85%. Most of the produced maps had higher accuracies with NDVI indices, and their Kappa was very high. During the growing seasons, the most rangeland products changes, belongs to class 5 and 2 in the NDVI and SAVI indices map. The outcoming results of this study prove that the ASTER data estimates the plant production very well. Through this tool, one can monitor the hay production that is very useful for resources management as well as decision making for logic rangeland utilization. Generally introduced indices, provided accurate quantitative estimation of the parameters. Therefore, it is possible to estimate cover and production as important factors for rangeland monitoring using ASTER data. 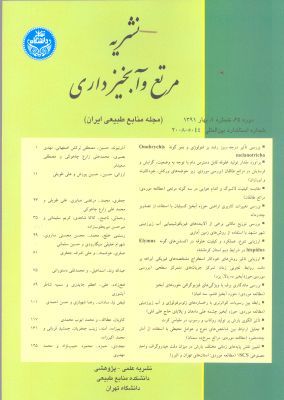